Reynella Football club has entered 21 teams into the 2017 SFL season.

This year saw Reynella enter two C grade teams to cater for all our players. Reynella had from U18 last year nearly a whole team eligable for seniors football, some returning and some new faces come to the club. Without putting in a second C grade team a lot of players would have been turned away or missing out on a game. Reynella would like to thank the Australians Champions League for allowing us to use their clash jumper for the first 6 weeks of the season until our new jumpers arrived and they look fantastic. The club is still receiving enquries into C grade footy, come to training on a Thursday night and we will go from there.

With the long-weekend here, Association Football will take place Saturday at M-Vale Oval with SFL hosting GSFL. Good Luck to all the Reynella boys in the squads fighting it out to be in the teams. Seniors: 2.30pm, U15: 11am.

The second Reynella C grade derby will take place on Sunday 1.40pm, Will the Blacks take a 2-0 lead over the whites? or will the white square the ledger at 1-1.

This season has seen the club turn a new lease of life with many changes in the coaching staff and playing group as well as new age groups introduced by the league. This year has seen many of our young players getting exposed to senior football whether that be A, B or C grade and they are performing well. These are fantastic signs for the clubs future and some have been called up to South Adelaide giving them exposure to a higher level of competition allowing them to come back strong to us.

Huge Thank You to ALL our Club Volunteers. Many of our volunteers are amazing and perform multiple duties for the club that go unrecognised. These people are the ones who make our club. Please consider what you can do and join the club, the feelings of being part of the team keeps many coming back.

The Ladies Day was such a success with great feedback from ladies wanting another one later in the season that our girls are now looking at options. Thank You to everyone that attended, donated gifts and to Sarah, Tania and Lorna for making it happen.

Loved the effort put in by many for our Superheroes night. Almost had the full Avengers Team make an appearance, minus Iron Man. The jukebox was cranking till the early hours of the morning and great memories made.

The next Event is being decided due to checking availability of Bogan Bingo and ABBA Gold. We do have a poll going in our Photos Group to get feedback of ideas from people as to what they want.

Wheel Barrow Raffle will be beginning in the next couple of weeks with some excellent prizes in the barrow to be won. Keep your eyes out for tickets.

Keep supporting the club, without you footy clubs do not exist.

Start Getting Your Syndicates Ready for our 2017 Player Auction.

This Year votes will be collected from our A, B and U17.s players.

Now start getting out your stats and work out which group your Owning.

Hosted by Rod ‘Rocket’ Smitheram, it should be a fun night. 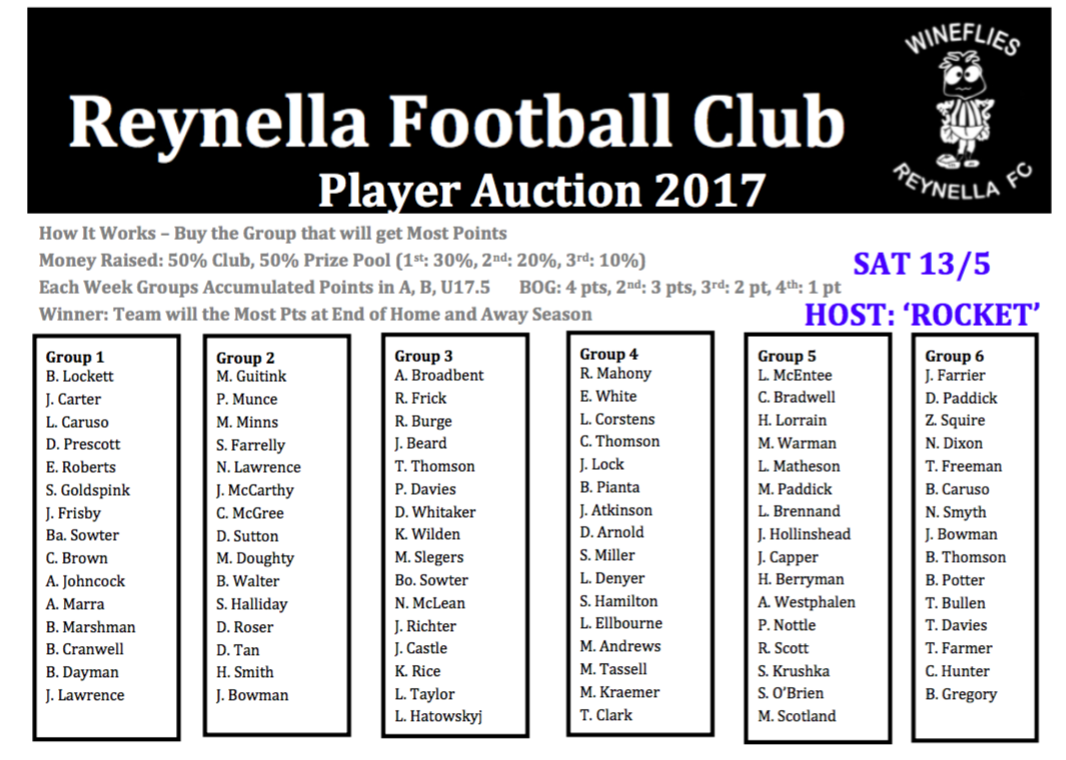 For Safety Reasons: Must Stay Behind the Fence During Play

NO Alcohol Permitted on Ground

Proceeds from the day will support the Little Heroes Foundation and Captain Courageous.

Gates Open: 9am, Entry via Ashley St or Meyer St